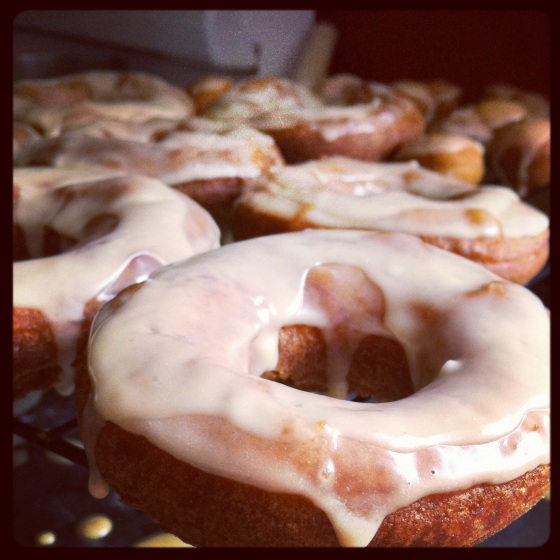 I made you these doughnuts. Apple. Cider. Doughnuts.

Ok, so maybe I made me these doughnuts. Me and my husband. For breakfast. On a cold sunday morning in Wisconsin. And maybe later that day I heated up some of the extra cider with some bourbon. Just maybe.

Have you ever had cider doughnuts? They feel like fall to me. Especially warm, topped with even more cidery delicious goodness. They’re a super easy doughnut. They’re cake doughnuts so there’s no rising and waiting and rising again. Mix up the dough, heat some oil, and boom. Fresh doughnuts. So, so many doughnuts. I saved half the dough for next weekend to make more. 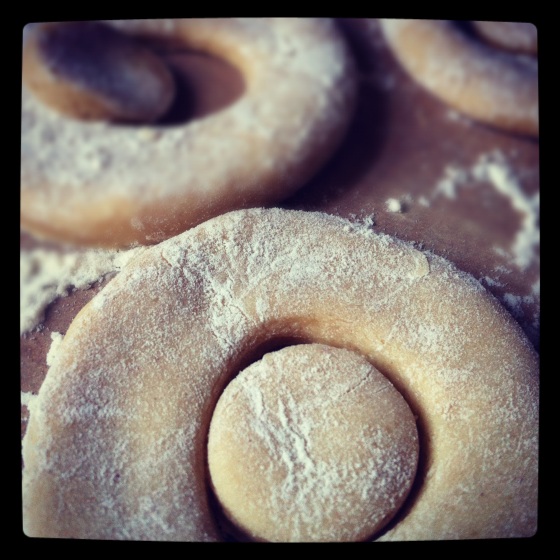 The outsides get crisp and golden, while the insides stay fluffy and light. They cook super quick, and even the rolling out process is simple. These are some seriously good doughnuts.

Go make them this weekend.

3 1/2 cups flour, plus additional for the work surface

1. In a saucepan over medium heat gently reduce the apple cider to about 1/4 cup, 20 to 30 minutes. Set aside to cool.

2. In a bowl, combine the flour, baking powder and soda, cinnamon, salt and nutmeg. Set aside.

3. Using an electric mixer on medium speed beat the butter and granulated sugar until the mixture is smooth. Add the eggs, one at a time, and continue to beat until the eggs are completely incorporated. Use a spatula to scrape down the sides of the bowl occasionally. Reduce the speed to low and gradually add the reduced apple cider and the buttermilk, mixing just until combined. Add the flour mixture and continue to mix just until the dough comes together.

4. Turn out dough onto well-floured surface. Roll out until approximately 1/4 inch thick. Using a 3-inch or 3 1/2-inch doughnut cutter — or a 3 1/2-inch round cutter (or a glass like I did) for the outer shape and a 1-inch round cutter for the hole, cut out doughnut shapes. Place the cut doughnuts and doughnut holes onto the second sheet pan. Re roll scraps of dough. They will not be as tender, but still delicious.

5. Add enough oil or shortening to a deep-sided pan to measure a depth of about 3 inches. Attach a candy thermometer to the side of the pan and heat over medium heat until the oil reaches 350°F*. Here’s a bit of truth for you. I don’t have a candy thermometer. I set the burner to medium and wait until it’s good and hot. Have ready a plate lined with several thicknesses of paper towels.

6. Carefully add a few doughnuts to the oil, being careful not to crowd the pan, and fry until golden brown, about 60 seconds. Turn the doughnuts over and fry until the other side is golden, 30 to 60 seconds. Drain on paper towels for a minute after the doughnuts are fried. Dip the top of the warm doughnuts into the glaze or cinnamon sugar mixture (if using) and serve immediately.

1. Heat cider over medium heat until reduced to 1/4 cup. Mix until smooth and no lumps remain.