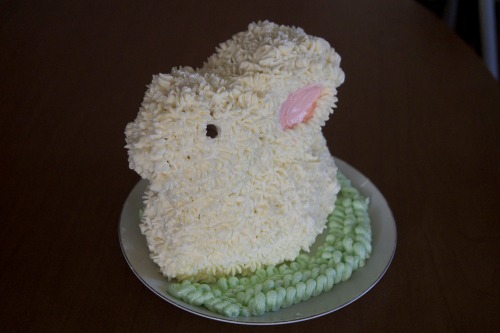 I wrote this lovely missive about Easter, and bunnies and cakes.  It was delightful, and funny.  And then I lost it.  Why would I not type it up the second I got home?  Idiotic.  If it magically reappears, I will replace this post with it’s intended rant.  Until then, I leave you with photos and recipes.

Bunny cake pre-frosting.  This cake was adorable.  It was not however, as delicious as it looks.  It’s so wide that I had to cook it much longer then the instructions said just to have a toothpick come out clean.  And then when we cut into the middle there was still raw batter at the center.  I would have had to char the outside to cook the inside.  The frosting was delicious since I made this buttercream.  I omitted the salt and vanilla.  Next time I make a cake shaped like something I plan on simply cooking different sized cakes and sculpting the shape I want.  I went to art school, I can do that, right?

I also used a lot of pineapple on Easter.  In the cupcakes I made with the abundant amounts of batter I had left over from the cake, in the glaze for the ham, and in the vinaigrette for the salad.

Dough for the rolls.

After rising before going into the oven.

You can find the recipe for these here.  They call for bread flour, I used all purpose.  It work’s just fine. 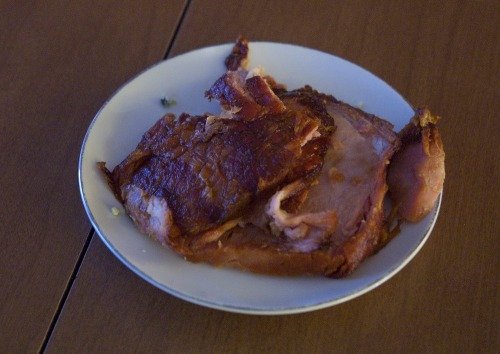 Here’s the ham.  I didn’t take a picture of the whole thing, which is a shame, it was a thing of beauty.  I made a pineapple, brown sugar, rum glaze.

1.  Mix all ingredients in a medium saucepan and cook over medium heat until sugars have melted.  Turn heat down to medium low and stew for at least 1 hour, longer if desired.  You are trying to get as much juice to cook out of the pineapple as possible.  Add a little water if necessary.

2.  When ham has 1 hour remaining of cook time, brush ham thoroughly with glaze.  Dump some of the stewed pineapples on top of the ham as well.  Baste every 15 minutes with glaze until ham is done and glaze is nicely caramelized.

I also made hasselback potatoes.  That’s a fancy way to say you slice them without cutting all the way through, and wedge garlic in between the slices.  Then you baste them with butter every 15 minutes.  They are really yummy.

I made this quiche too.  I added bacon, because everything is better with bacon.